The organizations called “krewes” and their structural ranking of royalty, involving some form of a king, queen, knights, or captains, are extremely well-known throughout Mardi Gras traditions. Many of these well-known krewes were named after Greek or Roman mythology and often invitation only. As a result, many felt they could not participate in these well-known, typical New Orleans parades due to cultural separation.

Gradually, these left out neighborhoods began to develop their own style of celebrating, including krewes that were named from imaginary Native American tribes according to street locations. These krewes were named after native Indians in order to pay respect for those who accepted and assisted newly freed citizens into society. In 1885, Plains Indians marched in native dress on the streets of New Orleans, resulting in the first Mardi Gras Indian tribe to be formed later that year by the name of “The Creole Wild West”.

Around 40 tribes participate in Mardi Gras celebrations, ranging in size from half a dozen to several dozen members. Some of the most well-known tribes include the Wild Magnolias, the Bayou Renegades, and the Golden Feather Hunters.

Weighing upwards of one hundred pounds, the typical time it takes to design and create a suit usually takes between six to nine months. Each design in created by the Indian planning to wear it, containing elaborate beading and patch work in order to depict meaningful and symbolic scenes. Beads, feathers, and sequins are a major part of a typical Mardi Gras Indian suit, but suits main cultural customs can change depending on the tribes. The uptown New Orleans typically focus more on the sculptural and abstract aspect of African-inspired suits. Downtown tribes, however, tend to have more pictorial suits heavily influenced by Native Americans.

Suits are revealed on Super Sunday and often rival professional costume designers. It has been said that each suit costs around $5,000 in material each year, including up to 300 yards of down feathering trimming. Bead work is completely done by hand and feature a combination of color and texture, resulting in some of these suits being displayed in museums throughout the country.

There are many different roles that are played during a typical Mardi Gras Indian parade. Plain clothed informants stay several blocks ahead of the parade routes, serving as a look out for any danger. Each procession begins with “spyboys” typically dressed in light running suits. This allows them to have to freedom of mobility in case of emergencies while still dressed in traditional attire.

Following the “spyboys”, the “first flag” comes next in the lineup. This is usually an ornately dressed Indian that carries that token flag of their tribe. The final role following behind the first flag is the “Big Chief”, typically carrying the symbolic weapon. The “Big Chief” is in charge of deciding where the tribe goes and which other tribes to meet. These major roles are followed by the entire group, and the entire group is followed by percussionists and revelers.

Before, Mardi Gras was a violent day for many Mardi Gras Indians, typically used to settle scores. The traditions of mask wearing and large crowds only adding to the general confusion and often keeping families from joining in the celebrations.

In today’s society, however, two tribe’s passing one another is a living example of art and culture. Each tribe’s displayed style and craftsmanship is put on display in a competitive and, most importantly, a friendly manner, allowing each other to compare their works. Their violent history no longer plays a part in this friendly celebration. While a part of their typical traditions includes one chief demanding the other to bow and pay respect, it eventually ends in both chiefs complementing each other’s craftmanship of their suits. Considering the thousands of dollars and hours that are invested into the creation of their own suit, it makes complete sense as to why they no longer risk ruining them in a fight.

While the tradition of Mardi Gras Indians is considered the least known or acknowledged of the Mardi Gras traditions, they are appreciated and seen as rich in folk art and history by many museums and societies around the world.

Mardi Gras bringing you to New Orleans? Don’t forget to stop and see all of what New Orleans has to offer. For those looking for a little adventure that features a unique and up-close experience with local wildlife, look no further than Cajun Encounters.

Guests are able to experience the beauty of one of the most untarnished ecosystems in America first-hand, and, if that is not enough, there are plenty of educational opportunities to learn about the plants and animals that inhabit it. Guests are guaranteed the best educational experience possible with trained experts as their guides. Cajun Encounters is working hard to ensure not only the satisfaction but also the safety of its visitors by implementing proper COVID-19 protocol.

Be sure to book in advance to ensure your spot. You do not want to miss out on this incredible experience. 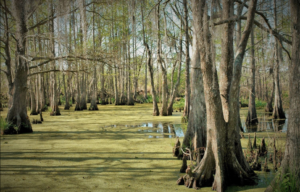